Artificial Intelligence (AI) has become one of the most trending buzzwords in gaming industry of today. Almost every game developer now strives to add some flavor of AI in their video games to generate responsive, adaptive and intelligent behaviors that mimic human cognition.

AI in video games may sound as a new innovation, but one of the very first attempts to use game AI had been made in 1950s when Arthur Lee Samuel, an American pioneer in the field of computer gaming and AI, built a self-learning Checkers-playing program. AI has come a long way since then, from IBM’s Deep Blue that defeated a reigning world chess champion, Garry Kasparov, on 11 May 1997 to Google’s AlphaGo AI Go player that defeated the world’s best human Go player.

However, the future of AI in video games is not just to outsmart humans, but to generate a user experience that is better and more unique.

Before we proceed further to understand how AI is a boon to video games, let’s understand in a nutshell what AI basically is.

Artificial Intelligence is a science that makes a computer program or a machine capable of thinking, learning and solving problems the way human brain does. The sole reason why “Artificial” is used in “Artificial Intelligence” is that such intelligence is not acquired naturally as we humans do, but by using learning algorithms that assess vast amounts of data and make logical sense out of it to behave or respond intelligently like humans. Machine learning (ML) is a subset of AI that uses certain algorithms to learn and make smart decisions.

Facebook’s image recognition, Amazon’s shopping recommendations, Apple’s Siri and Netflix’s personalized video streaming service are some of many examples of AI people come across in their daily lives.

As far as AI development for games is concerned, you can think of F.E.A.R, The Last of Us, Far Cry 2 and First Person Shooter (FPS) like Call of Duty: Black Ops II. Let’s dive deeper into this.

How AI was used In those Games

If we talk about F.E.A.R, the reaction from enemies is not predictable at all. The game AI makes them capable of reacting to each other’s situations and learning from their mistakes and never repeating them. As a result, the players need to keep devising new strategies and never sit in the same position. Many video game companies are now looking to hire AI game developers as AI and ML in game development are quickly gaining ground to meet the expectation of today's modern gamers.

In The Last of US, Ellie is a companion AI of Joel, the player’s character. She accompanies and supports Joel throughout most of the game. All her moves, dodging style, taking cover, runtime cover, combat performance, fire rate and accuracy look natural and believable, making the game awe-inspiring.

The enemy AI of Far Cry 2 amazed players with its brutality and unforgiving nature. The players never saw such a chaotic and unpredictable AI behavior before. Even the veteran players hard a very time to win the game.

Call of Duty: Black Ops II displays one of the best AI bots behaviours. The commendable AI algorithm enables each bot in the game to use different tactics, like running, gunning, knifing, camping and drop-shooting/jump-shooting.

One of the best uses of AI that Artificial Intelligence game developers make  is controlling the behavior of NPCs. The games without AI often become boring after playing for sometime as they become easy to beat due to their predictable behavior. The real fun of playing video games comes from competing with NPCs that react in unpredictable way and surprise you.

Imagine an FPS game in which enemies are capable of analyzing their environments so that they can find what’s important for their survival or take actions that preempt your intelligent moves to increase their chances of victory. Not only this, what if they can learn from their own actions and are able to take cover, recognize sounds and patterns, communicate with each other and maneuver in a way you never saw or predicted before. Having new experiences despite playing such a game several times keeps players excited and enticed to keep coming back, isn’t it? An expert artificial intelligence game design company can help you build such games that player love to play for long long hours.

AI is also used for Pathfinding in real-time strategy games. Pathfinding means that NPCs are adept at moving from one point on a map to another after analyzing the terrain, obstacles and possibly "fog of war”. AI provides enemies the ability to safely navigate in a dynamic environment without colliding with other entities. It also enables group navigation by allowing an NPC to collaborate with other NPCs. 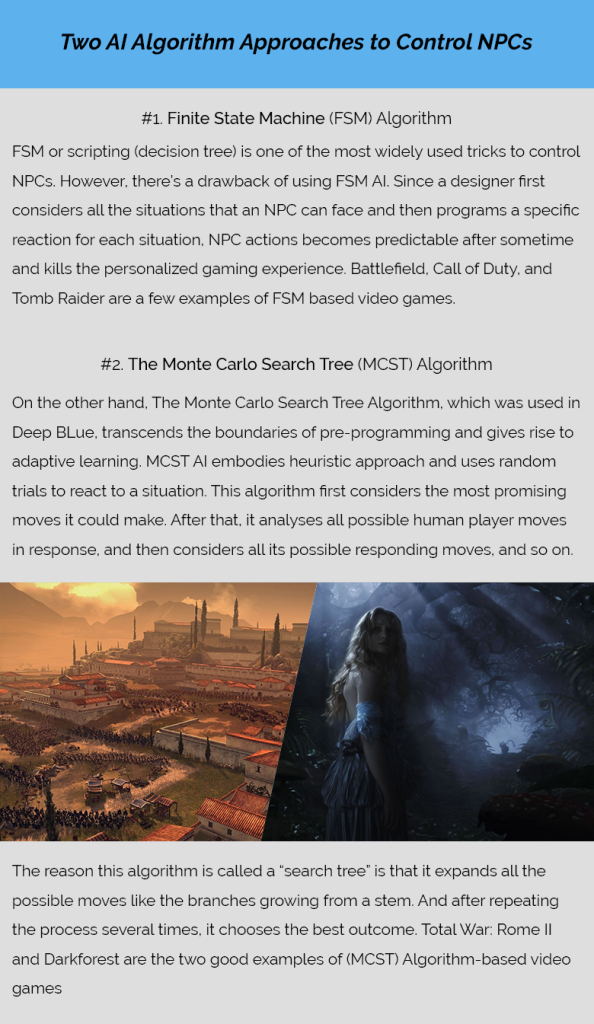 AI has a huge potential to improve visual quality of video games, making them appear more realistic and natural than ever before. Game environments and game characters can mimic the real world through deep learning and by using algorithms that make sense of the ever-growing amounts of game data. Video games look more realistic when NPCs behave like humans, be it walking, moving, running, expressing themselves or making a decision.

Combining AI with Virtual or Augmented Reality further opens the gates to add reality factor to video games. Pokémon Go, an augmented reality-based game, has already proved that immersive and interactive video games are the future, be it on mobiles, computers, Xbox or Playstation.

AI overhauls the overall gaming experience by real-time customization of scenarios. EA Sports’ FIFA 17 is a good example to understand how.

The game gives you one of the five player choices to pick for each position in your team. However, you have no idea what the chemistry between the players you have chosen for your team is. But don’t worry, the AI of the game is so designed that it automatically determines that for you and increases the chances of your team performing well.

Besides, the AI makes the game more interactive by boosting your playing experience. For instance, if you’re losing a game, it will encourage the fans to cheer for your team louder, so as to lift the morale of your team and make your players perform better. Such an ability of AI takes the overall gaming experience to an all new level.

Another virtue of AI-designed video games is player-experience modeling, which means providing tailor made experience to players as per their level of expertise in real time. So, if a player is a noob, the AI will adjust the difficulty level to easy mode so that the player doesn’t get frustrated or exapserated for not being competent enough to progress in the game. On the contrary, if a player is an expert, the AI will make the game difficult so that the player doesn’t get bored or jaded. This ability of AI is called dynamic game difficulty balancing.

Crash Bandicoot, Archon: The Light and the Dark and Flow are some video games that use dynamic game difficulty balancing. Game AI can also determine player intent through gesture recognition which enables players to communicate and interact with video games naturally without any mechanical devices.

There are also many open world or survival games that use procedural content creation to create a game world from a random seed or one provided by a player, making each playthrough unique with high visual appeal. This technique has already been used in many video games, including Rogue, Elite, Diablo, Diablo II, Dwarf Fortress, etc.

The most beautiful part of AI in video games is incredible environment creation and presenting unpredictable scenarios by altering the flow and intensity of the gameplay, which makes gaming a lot more fun. There’s nothing better for a player than getting a satisfying and challenging experience, right? As the future unfolds, we will see more and more games with AI controllers to optimize user experience like never before. Besides, AI will also provide a testing ground to game developers to improve their code and design to finally build a game that rocks the game charts.

Logic Simplified is a game app developer which always believes in embracing new technologies to keep the pace with ever-changing market demands. And, AI is no different! You can hire AI app developers from us to get advatage of our expertise in AI game development and build games that offer gamers personalized and highly interactive experiences. Please write to us at enquiry@logicsimplified.com to discuss your AI game idea, and we will get back to your shortly to tell you how we can help shape it into a reality.