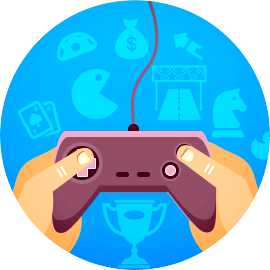 Consoles and handheld devices are extremely modest in design, convenient and versatile when compared to a gaming PC which speaks volume for its undying popularity among gamers. Console games have created a niche gaming community with both Xbox and PlayStation leading the console war over the years. Console games are controlled through a handheld device called the controller for interacting with in-game objects and together with speakers, console, display and controls can be incorporated into an object known as Handheld game. These games are generally loaded and played through multimedia disc created for specific consoles.

The most vital component of Multiplayer games is the Networking Servers and Communication Protocols. We have expertise in wide range of solution based on your game latency delay expectations and delivery platforms of the game. Security and other Factors also drive the decision to choose either Open Source or Proprietary Solutions.
We have expertise in the following Servers/Protocols.

We have an experienced team; specialised right from conceptualization, design, and development to optimized plan for specific console deployment and other licensing procedures.

Here are some tools and framework we use:

Hire our Playstation, Xbox or Nintendo game developers through interview and work closely with them. You manage them and we bill you for hours worked.

After you discuss your idea with us we give a fixed cost and delivery plan. We architect, manage and deliver the project. We have daily/weekly status calls.You approve designs and releases at every steps.